This 'Made in India' app was launched 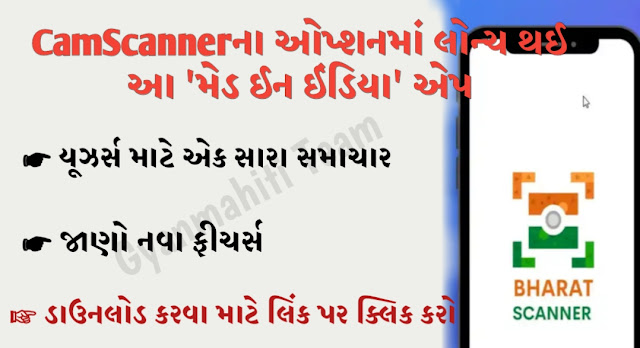 In recent days, the Indian government has banned a total of 59 Chinese applications in India for data privacy reasons.  This app is against many popular applications like CamScanner and TikTalk.  Ben is also still running on this application.

Many users in India are also having a bit of a problem as it seems to happen on an app like CamScanner.

Meanwhile, the good news for such users is that the Indian app Bharat Scanner, similar to CamScanner, has been launched.  Users can scan documents using the Bharat Scanner app.  Also convert it to PDF.  Which also includes many types of filters.

According to the information provided in Bharat Scanner's website, your data is very secure in it.  This application keeps your data in your phone.  It also has features like auto edge cropping.

The India Scanner app is absolutely free and can be downloaded from the Google Play Store.  India Scanner's website calls it Camscanner True Alternative.  It also says that the app has been developed by BITS Pilani and IIM Bengaluru alumni.  They also have over 10 years of industry experience.

The Government of India has launched this app

Notably, the 59 applications that the Indian government has banned include many popular apps.  The apps also include TikTok, CamScanner, Shein, Clash Of Kings, UC Browser, Club Factory, NewsDog, Beauty Plus, We Chat and UC News.